At present, the perception of a workplace is nothing like it used to be and distance work is the new day-to-day reality for millions of people. So technology has to evolve really fast to keep up with the demand.

For Windows-based machines, everyone's favorite way of connecting to a remote computer is via the Microsoft protocol called RDP(Remote Desktop Protocol). But when it comes to making RDP connections, you’ll have several options to choose from. And in this article, we’re going to take a look at the most popular ones.

Windows, macOS, Linux, Android
4.8 Rank based on 386+ Reviews
Get started
Use Remote Desktop or Remote Assistance more efficiently with FlexiHub

Remote assistance and remote desktop are the two scenarios for making RDP connections that are very similar from a technological perspective. For one, neither of them is going to work until you allow remote assistance connections to this computer from the control panel.

Also, both of these methods were originally designed for local area networks so security wasn’t the main consideration. Meaning, they have zero protection against brute-force username/password attempts. And in view of thousands upon thousands of malware apps and bots searching the web for RDP servers so it’s very advisable to avoid exposing your VPN connections to the Internet or, if you absolutely have to, use VPN at the very least.

As to the differences between remote desktop and remote assistance, they are all conditioned by the varying application niches.

How does remote assistance differ from remote desktop?

The main difference between remote assistance and remote desktop connection is that remote assistance is mostly used for remote technical support and the user retains control over their machine and sees everything that’s going on. Through the remote desktop connection people, most of the time access their own PC from a distance so the desktop gets locked and there is no interactability for all the session time. 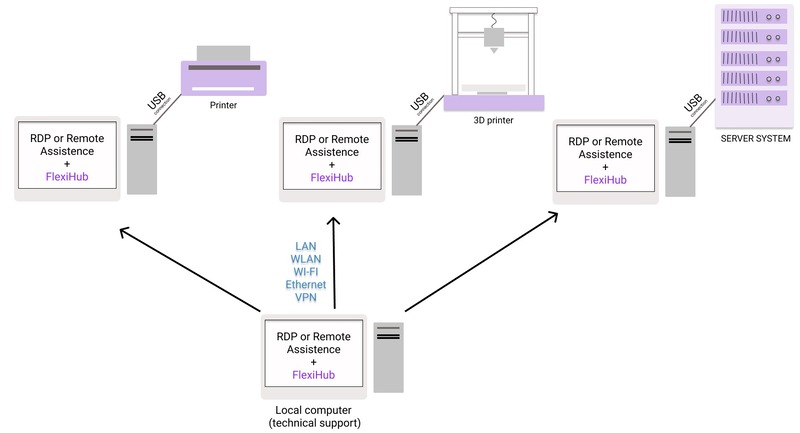 If you’re looking for a secure way of using remote assistant service over the Internet, don't give short shrift to third-party tools like FlexiHub for Business. It’s a power-packed service that gives you full access to remote USB peripherals not only for monitoring but also for straight-forward maintenance and problem fixing (and that exactly what Windows remote assistance is mainly used for).

Plus with its help, you can easily set right smartphones, tablets, e-bikes, and electric scooters whenever they are while never leaving your worksite. You can even provide your customers with a remote auto mechanic service which is a great virtue when bringing a vehicle to a car repair shop isn’t feasible for any reason.

Expect a regular Personal subscription to not handle the needs of your organization?

We specifically created a Business subscription with corporate clients and big enterprises in mind.

Unlike Microsoft’s RDP assistant utility programs, FlexiHub for Business was specifically designed for long-range connectivity over the Internet so it has top-class data protection on many levels, from the advanced 2048-bit SSL encryption to a handy device locking feature and login tokens for controlled account access. Even if the remote PC you’re about to access has no public IP address or is hidden behind NAT, it’ll be available for you through the UDP communication protocol.

The best part of going with FlexiHub for Business instead of other remote desktop assistance apps is that you don’t even have to allow access to your whole PC, just to the device that needs fixing.

Here are some other awesome benefits FlexiHub has to offer for your business:

And if you only provide your service for a definite number of loyal clients, FlexiHub has a great way to save you some money called Team Subscription. You’ll have a single easy manageable account (no need to buy one for each of your customers) and 10+ simultaneous connections, plus an unlimited number of unique nodes.